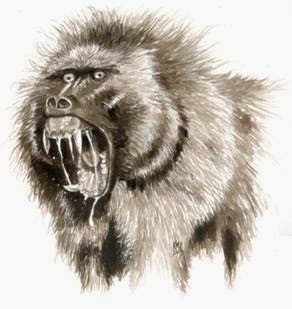 Experience: 400
Devil monkeys are large baboon-like primates living in the Appalachian mountain range of North America. They are described as very aggresive to humans and often kill stray travelers. Devil Monkeys are a unique breed of monkey that have been described as a shaggy, canine-faced baboon-like creatures with powerful, almost kangaroo-like legs, a trait they share with the South America’s notorious “goat sucker” the chupacabra. Other distinguishing traits that Devil Monkeys are said to bear include 3-toed, razor-clawed feet, tiny pointed ears and a long, often bushy, tail.